What? Another Shakespeare Derivative with Patrick Stewart? 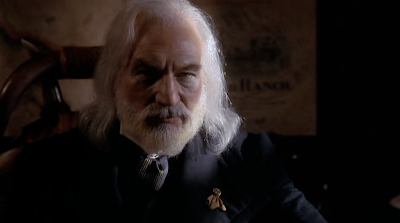 King of Texas. Dir. Uli Edel. Perf. Patrick Stewart and Marcia Gay Harden. 2002. DVD. Turner Home Entertainment, 2002.
Of the three—yes, three at the barest minimum—adaptations of King Lear set in the American Old West, King of Texas isn't the worst. But it is pretty bad.

But it has Patrick Stewart. Say what you will (and if I know you, you'll say anything), but he's a good actor. A good Shakespearean actor, too.

But I'd a thousand times rather see him play Lear straight than to choke my way through King of Texas again.

On the other hand, it also has Colm Meaney, another of the actors on Star Trek. Still, I don't know if that's enough to justify the stilted dialogue, the strangeness of some of the directorial decisions, or the odd mixture of accents.

At some point, I'll try to track down a clip to pass along to you all.
Links: The Film at IMDB.