Shakespeare in The Twilight Zone: “The Passersby” 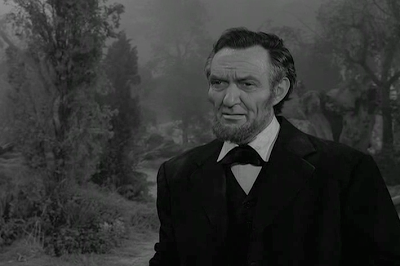 I told you that to tell you this: When Abe Lincoln shows up in The Twilight Zone, it's with Shakespeare on his lips.

This episode, which is on the dramatic side, features a road—a road that the dead of the Civil War walk as they leave this earth. I hope I'm not giving away a spoiler by saying that Lincoln has to walk this road as well.

As he does so, a line from Julius Caesar seems fitting to him:


Of all the wonders that I yet have heard,
It seems to me most strange that men should fear,
Seeing that death, a necessary end,
Will come when it will come. (II.ii.34-37)

Perhaps because they're too familiar, Lincoln leaves out the first two lines of Caesar's words—the more famous part of the speech:


Cowards die many times before their deaths,
The valiant never taste of death but once. (II.ii.32-33)

The result is that the speech seems more sensitive—less prone to accusations of bragging—and that, too, seems in keeping with Lincoln's character.

Great timing with this post (Lincoln killing it at Awards season). I put the quote in my new book as something a character says. I was too afraid to use the second half and went in for 'Coward die...' and then I was so overcome with guilt for leaving out the second part I ended up putting the whole bit in. I guess some readers will think I quoted too much but maybe once in a while someone will dig it. I respect Rod Serling big time for having the balls to just use part 2 standalone

While you're waiting to see Spielberg's "Lincoln,", you might want to read Guelzo's "Lincoln and Douglas: The Debates that Defined America." The drama of the debates are the best preparation for the drama of the movie. Great tandem pieces.

Now I can't wait to see how Caesar delivers these lines in Gregory Doran's African setting of the play.