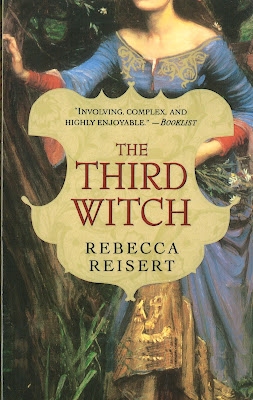 Reisert, Rebecca. The Third Witch. New York: Washington Square Press, 2002.
This novel is not just another retelling of Macbeth. The development of character, of setting, and of plot are all superior, as is the writing itself.

In The Third Witch, elements of the plot of Macbeth are carefully and skillfully interwoven with an immense, overarching narrative of the life of Gillyflower, the youngest of the three Wëird Sisters. For reasons that do not become clear until the end of the novel (and I'll offer no spoilers on that subject here), Gillyflower has vowed to obtain revenge on Macbeth—almost always called "Him" with a capital H by our narrator.

Nettle and Mad Helga are the other two witches, and they reluctantly—and with the same kind of equivocal warnings they offer Macbeth—aid her in her revenge. Gilly's impatience at the process is one of the most delightful and humorous points of this novel. They meet Macbeth and Banquo and enact a scene pretty much like the one in Act I, scene iii of the play. Immediately after, Gilly basically says, "That's it? That's revenge? What an anti-climax!" and goes off to try to push her revenge along a bit.

As a sample, I'm providing pages ten to twelve in the images below (click on them to enlarge them). They will give you a good sense of the quality of the novel as a whole and of the narrator's character at this point in the novel. 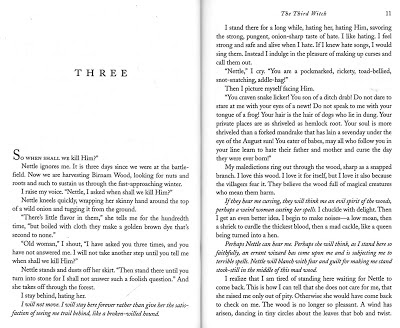 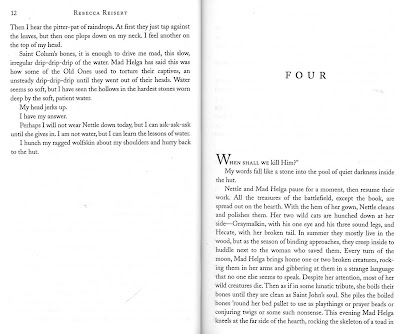 The novel is quite impressive—it's a well-written, innovative parallel narrative to Macbeth—and I highly recommend it.
Click below to purchase the book from amazon.com
(and to support Bardfilm as you do so).