Shakespeare in Huckleberry Finn (The 1939 Film with Mickey Rooney) 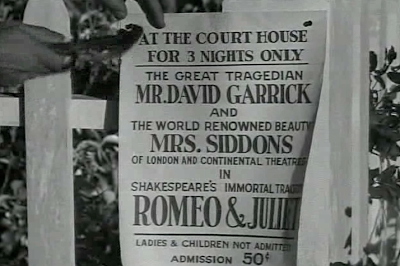 Huckleberry Finn. Dir. Richard Thorpe. Perf. Mickey Rooney, Walter Connolly, and William Frawley. 1939. DVD. Warner Brothers, 2009.
Back in May of 2012, I wrote about some of the Shakespeare in Mark Twain's Huckleberry Finn and a bit of that that made its way into a 1955 film version of the novel (for which, q.v.).

A little while later, I tracked down the 1939 film—the one with Mickey Rooney as Huck—and found a great deal more Shakespeare in it. I prepared a clip, uploaded it to the blog, and promptly forgot all about it.

But my forgetfulness is your (eventual) gain! Here's the clip:


I find that delightful. And I'm impressed by the playbill, too. Imagine being able to see David Garrick and Mrs. Siddons play these roles—fifty years or so after they died. Please note, also, the line that declares "Ladies & Children Not Admitted." Perhaps I should have mentioned that earlier in this post. I apologize if any Ladies or Children have been offended.
Links: The Film at IMDB.