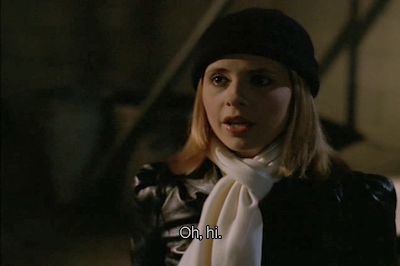 “Normal Again.” By Joss Whedon and Diego Gutierrez. Dir. Rick Rosenthal. Perf. Sarah Michelle Gellar, Nicholas Brendon, and Emma Caulfield. Buffy, the Vampire Slayer. Season 6, episode 17. The WB Television Network. 12 March 2002. DVD. 20th Century Fox, 2010.
While deep in research on adaptations and derivative versions of Titus Andronicus, a careful reader told me to try this episode of Buffy, the Vampire Slayer, a show I had never watched (even though I mentioned it in a presentation on violent female characters in Shakespeare).

She later said (when I had viewed the episode and declared myself unable to find much in the way of Titus-related material) she may have been mistaken.

All the same, I found one quote that might be relevant. Buffy asks the monster that pounces in a question that might easily have been addressed to Tamora in the final scene of Titus Andronicus: