Book Note: The Heat of the Sun 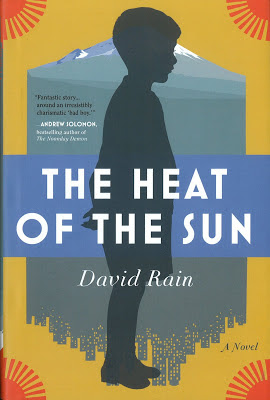 Rain, David. The Heat of the Sun: A Novel. New York: Henry Holt, 2012.
The title of this novel comes from Cymbeline. Imogen, Cymbeline's daughter, has disguised herself as a man named Fidele and travelled to Wales. There she meets Guiderius and Arviragus, Cymbeline's sons, who are disguised as the shepherds Polydore and Cadwal. Imogen has swallowed a Julietesque sleeping draft, and the brothers think her dead. They sing a beautiful song of mourning over her:


Fear no more the heat o’ the sun,
Nor the furious winter’s rages;
Thou thy worldly task hast done,
Home art gone, and ta’en thy wages:
Golden lads and girls all must,
As chimney-sweepers, come to dust.

Fear no more the frown o’ the great;
Thou art past the tyrant’s stroke;
Care no more to clothe and eat;
To thee the reed is as the oak:
The sceptre, learning, physic, must
All follow this, and come to dust.

Fear no more the lightning flash,
Nor the all-dreaded thunder-stone;
Fear not slander, censure rash;
Thou hast finish’d joy and moan:
All lovers young, all lovers must
Consign to thee, and come to dust.

No exorciser harm thee!
Nor no witchcraft charm thee!
Ghost unlaid forbear thee!
Nothing ill come near thee!
Quiet consummation have;
And renowned be thy grave! (IV.ii.258-81)

The Heat of the Sun does not do very much with the plot of Cymbeline, though it is quite a compelling novel all the same. The plot involves political intrigue and scandal from the early 1900s to the use of the atomic bomb in World War Two (and beyond). Our narrator—a would-be poet, might-be novelist, actual journalist—keeps bumping up against a senator's son named Trouble.

Early in the novel, Trouble arrives at our narrator's boarding school. At first, he is wildly popular; he then sinks into the utmost disrepute. In the scene that has the most Shakespeare, Trouble (in disrepute) is one of the boys who are reading out loud from Cymbeline in their English class. Here's the scene (click on the image below to enlarge it and to make it legible): 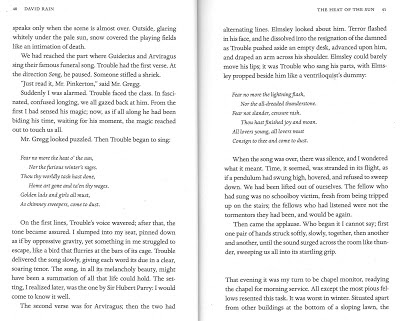 It isn't much, but it is compelling. And it reminds me of another novel that uses the same song from Cymbeline for its own purposes. Stay tuned!
Click below to purchase the book from amazon.com
(and to support Bardfilm as you do so).