Shakespeare in The Twilight Zone: “The Bard” 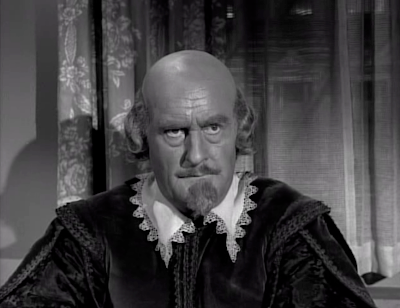 “The Bard.” By Rod Serling. Perf. Jack Weston, John Williams, Henry Lascoe, Marge Redmond, and Burt Reynolds. Dir. David Butler. The Twilight Zone. Season 4, episode 18. CBS. 23 May 1963. DVD. Image Entertainment, 2004.
Note: This is a repost of a 2010 blog post entitled "Extending Shakespeare's Biography: Shakespeare in The Twilight Zone" (for which, q.v.).
Speculations about what Shakespeare would be doing if he were alive today are not uncommon. Would he be Twittering? Would he be composing Broadway musicals? Would he make it to Hollywood? Would he make it in Hollywood once he made to Hollywood?

It's a outstandingly funny episode, and it's all the more remarkable for its characterization of Rocky Rhodes, the most devoted disciple of Stanislavsky that ever lived—played by a very young Burt Reynolds! He'll make an appearance in the clip below, criticizing Shakespeare for not liking Tennessee Williams.

The overall plot centers on Julius Moomer, a television scriptwriter who uses black magic to bring Shakespeare to Hollywood. He hopes Shakespeare will help him make it big. 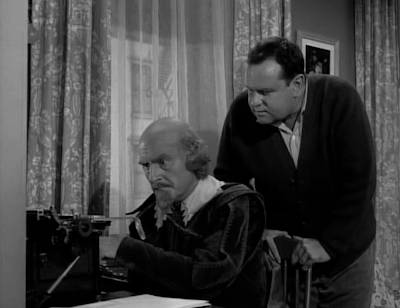 And Shakespeare does help—but the studio executives can't quite figure out what to do with his scripts. And the sponsors keep objecting to certain lines and wanting to change things. In what appears to be a Romeo and Juliet-inspired script, for example, they alter the balcony scene. The male lead meets the female lead in a subway station rather than on a balcony. Later, a horrified Shakespeare learns that his ending has been changed. Esmeralda (the Juliet analogue) doesn’t kill herself. She runs away with a bass fiddler from Artie Shaw’s Gramercy Five.

As a result, the script seems to be a hodge-podge of Shakespeare and modern (modern to the 1960s, that is) lingo:


Actor One: “Oh, come, Olivia. Cast off those benighted colors and . . . and gaze as a friend on Greenwich Village. Let not forever with your veiled eyes seek your noble boyfriend in the dust. It is common, I know. But all that live must die.”

The best parts are when Shakespeare works his own lines into the conversation—often citing their source. Here's the knock-down-drag-out fight that ends Shakespeare's career in television:

Shakespeare: “‘Blow, blow, thou winter wind, thou art not so unkind as man’s ingratitude.’ That’s from As You Like It, Act II, scene vii.”

Shakespeare: “Tell them simply that ‘Foolerly, sir, does walk about the orb like the sun; it shines everywhere.’ Act III, scene i, Twelfth Night. And you, Julius Moomer, foolish mortal who could have covered himself with a cloak of immortality, to you, Julius Moomer, who has succumbed to the rankest compound of villainous smell that ever offended nostril—to you, Julius Moomer . . . Lottsa Luck.”

Shakespeare, in that moment, seems to prove himself the master of both the language of his day and the language of ours, even as he disparages the modern television industry with lines spoken by Falstaff in The Merry Wives of Windsor:


By the Lord, a buck-basket! Rammed me in with foul shirts and smocks, socks, foul stockings, greasy napkins; that, Master Brook, there was the rankest compound of villanous smell that ever offended nostril. (III.v.89-93)

All in all, the episode provides a humorous and fascinating use of Shakespeare and his biography—extended, in this case, to 1963.
Links: The Film at IMDB.