Othello and Buffy, the Vampire Slayer 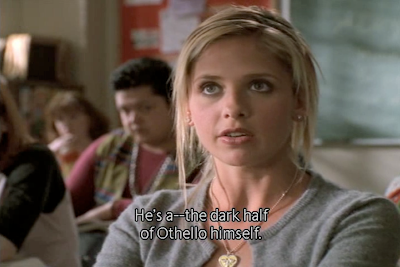 “Earshot.” By Joss Whedon and Jane Espenson. Dir. Regis Kimble. Perf. Sarah Michelle Gellar, Nicholas Brendon, and Emma Caulfield. Buffy, the Vampire Slayer. Season 3, episode 18. The WB Television Network. 28 September 1999. DVD. 20th Century Fox, 2010.
The same reader who pointed me toward the possibility of a Titus Andronicus reference in Buffy, the Vampire Slayer (for which, q.v.) gave me a tip about the show's use of Othello.

This one was much easier to find—though you can see by the subtitles that I chose to watch this at three times the speed (which is a reflection on my limited time rather than on the show's value). Buffy has developed the ability to hear what other people are thinking, and she uses it to (1) act like she knows the right answers in class and (2) reach an epiphany about her own jealousy.  I'll let the clip speak the rest for itself: