Welcome to Shakespeare in The Twilight Zone Week at Bardfilm 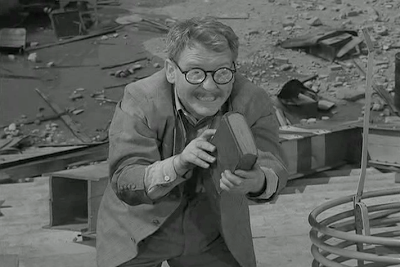 “Time Enough at Last.” By Rod Serling. Perf. Burgess Meredith. Dir. John Brahm. The Twilight Zone. Season 1, episode 8. CBS. 20 November 1959. DVD. Image Entertainment, 2004.
A while ago, I watched and listened to all the episodes of The Twilight Zone that I could get my hands on. In the course of doing so, I amassed a fair number of Shakespeare references in the shows.

Starting today, I'll be posting on those references, allusions, or quotations. I'll try to stick to references within the shows themselves—if an episode has a Shakespearean title but no Shakespearean content (as is the case with "Perchance to Dream," episode nine of season one), I won't even mention it.

Here, then, is the first mention of Shakespeare in The Twilight Zone—and it's one of the show's most famous episodes. A man who loves nothing better than to read—but who is prevented from doing so by the daily calls on his time by other concerns—finds himself the only survivor of a nuclear attack. In the clip below, he realizes that he will now be able to read without interruption:

I am also a huge fan of The Twilight Zone AND Shakespeare and for years I have always wanted to compile a list of Twilight Zone references to Shakespeare; Rod Serling was such a legend and I can never get over how cool it is that a Paramilitary Vietnam vet could be come back home after the war and proceed to tell such fantastical and wonderful stories - AND he loved Shakespeare and he was clearly inspired by it, referencing it in his work all the time?!!! COOLEST FILM MAKER EVER

God just thinking about TTZ is tripping me out - anyone see The Masks or the one where they are snowed in a cafe and one of them is an alien but they don't who??? Such an incredible TV show, mind altering. Oh yeah and the one with the balleria etc. waking up in a room they can't escape from? GENIUS GENIUS GENIUS

Thanks, Anonymous! I do hope you enjoy these--and please let us know if you've spotted any others!

Hi KJ I tried to send you an e-mail about Shakespeare refs but I think it might have gone into your junk folder? Just thought you might like to check unless you are totally asking me to talk to the hand in which case more pity me for being so friendly haha

It did go in the spam folder! I had no idea until you mentioned it. I have it now, and I'll reply from there. Thanks for letting me know that it was there.