Sonnets in Ten Things I Hate About You 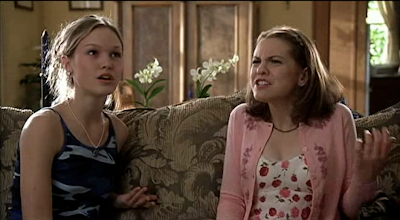 Ten Things I Hate About You. Dir. Gil Junger. Perf. Julia Stiles and Heath Ledger. 1999. DVD. Walt Disney Video, 1999.
Although I was enchanted by Ten Things I Hate About You when i first encountered it, I soon became disenchanted. Now, with a gap of a few years, I'm re-enchanted. Perhaps the reason was that I didn't care overly much for The Taming of the Shrew, the play on which this derivative is based (at least at its beginning). But I've grown to understand more about the play by teaching the play (which often happens), and I like the film more as a result.

The thing I appreciated most about the film this time around was the way in which its placing nearly everyone in the film into a stereotype brings out the way in which Shakespeare's Taming of the Shrew plays with stereotypes. Padua, like Padua High, is filled with easily-labeled stereotypes—which are (for the most part) broken in the course of the play.

This time around, I noticed the use of sonnets—possibly because I've been writing about sonnets on Bardfilm recently. In the clip below, the teacher presents the first four lines of Sonnet 141 ("In faith, I do not love thee with mine eyes") preparatory to giving his students an assignment. Kat (played by Julia Stiles) usually gives the teacher a hard time—that's why he responds as he does. The clip then segues to the completion of the assignment—after Heath Ledger's underhandedness (which he now regrets) has come to light. The poem (which seems to list thirteen things the narrator hates about the addressee) seems to be the source for the film's title:


Bonus! The two poems in question:

In faith, I do not love thee with mine eyes,
For they in thee a thousand errors note;
But 'tis my heart that loves what they despise,
Who in despite of view is pleased to dote;
Nor are mine ears with thy tongue's tune delighted,
Nor tender feeling, to base touches prone,
Nor taste, nor smell, desire to be invited
To any sensual feast with thee alone:
But my five wits nor my five senses can
Dissuade one foolish heart from serving thee,
Who leaves unsway'd the likeness of a man,
Thy proud heart's slave and vassal wretch to be:
Only my plague thus far I count my gain,
That she that makes me sin awards me pain.