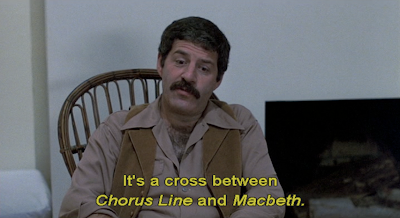 Tempest. Dir. Paul Mazursky. Perf. John Cassavetes, Gena Rowlands, Susan Sarandon, Raul Julia, and Molly Ringwald. 1982. DVD. Sony Pictures, 2007.
This may be one of the mircoest posts in this microblog, but here it is. In Mazursky's Tempest (part of which I'm using in my Shakespeare and Film class to show the degrees of Shakespearean derivatives), the characters mention the possibility of a new musical:  "It's a cross between Chorus Line and Macbeth."

The film itself is a good derivative, playing with the plot and abandoning Shakespeare's language.  "Show me the magic," says the Prospero analogue as he summons up a storm—toward the end of the film rather than the beginning.

It also introduces Molly Ringwald, who plays the Miranda analogue!
Links: The Film at IMDB.