Avant-Garde Meditation on The Tempest 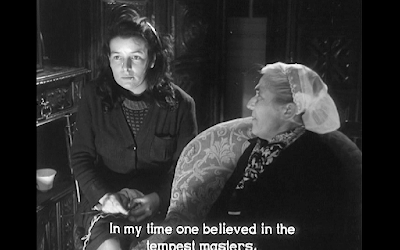 Le Tempestaire [The Tempest]. Avant-Garde: Experimental Cinema of the 1920s and 1930s. Dir. Jean Epstein. 1947. DVD. Kino, 2005.
In this version of The Tempest, a young woman is worried about her young man, who has gone out to sea. In her fear over the possibility of a tempest, she seeks out one of the ancient "Tempest Masters" who can prevent the storm.

It's not enormously faithful to the play, but it seems to play with the idea of the play—and with the power to control (in this case, to reverse or to prevent) storms at sea. The most visually-pleasing part is the waves running in reverse: