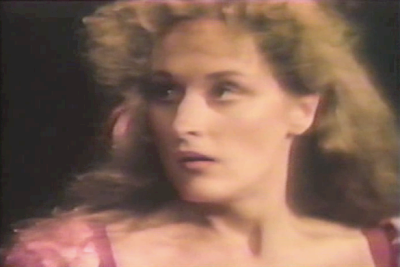 Kiss me, Petruchio. Dir. Christopher Dixon. Perf. Meryl Streep and Raul Julia. 1981. Videocassette. Films, Inc., 1983.
Meryl Streep fans were very kind when I wrote about her role as Katherine in The Taming of the Shrew, a performance that the documentary Kiss me, Petruchio partially provides.

They also made it quite clear that they would like a little more, thank you very much, of the rare, out-of-print footage of Meryl Streep that I had found. Raúl Juliá fans weren't quite so vocal, but I'm sure they'd like more, too. At least, I got that impression.

Here, then, is a bit more of Meryl Streep as Kate and Raúl Juliá as Petruchio in Act II, scene i of The Taming of the Shrew! The clip comes first; commentary follows.


I may have more to say about the commentary that Meryl Streep and Raúl Juliá provided on Katherine and Petruchio later; for now, I'll try to confine my comments to this clip.

The best thing about the clip is the way it seems to bring the feelings of the two protagonists honestly and openly to the surface. Kate becomes unaccountably (to her, at least) attracted to the machismo of Petruchio—much against her will. On Petruchio's part, he enjoys the teasing game and the game of wits. This is best exemplified in the tickling scene ("Why does the world report that Kate doth limp?" et al) and in that brilliant moment where he lifts her—seemingly effortlessly—and carries her across the stage.

Kate's response is marvelous. She's attracted, but very much against her will. She's intrigued, but she resents having any decisions made for her.

Note: A total of four clips of this production are available on this blog: The First Clip, The Second Clip, The Third Clip, and The Fourth Clip.
Links: The Film at IMDB.
Copyright 2008-2039 by kj at 5:34 AM

I love this production of Taming of the Shrew. I was able to watch a VHS recording of it in my high school english class. I've always wanted to find a copy of this tape or dvd would be even better. Do you have any idea where I could find a copy of the original recording featuring Raul and Meryl? Please please PLEASE let me know!!! Thanks!

Alas, this is very hard to track down. I would go to WorldCat and search for "Kiss Me, Petruchio" to see all the libraries that have a copy:

Perhaps one is near you!

I notice that the University of Iowa seems to hold a film copy--I imagine that would be higher resolution than the VHS tapes held elsewhere.

Good luck with your search!