New Tempest and New Lear on the Horizon 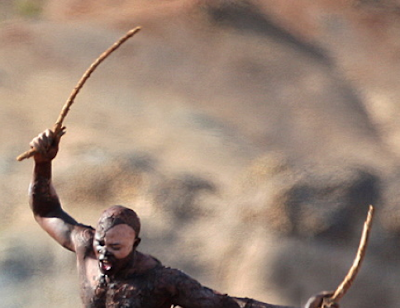 Tempest. Dir. Julie Taymor. Perf. Helen Mirren, Djimon Hounsou, Felicity Jones, and Ben Whishaw. Chartoff Productions, 2009.No one tells me anything! It's only recently come to my attention that Julie Taymor is directing a film version of The Tempest and Al Pacino and Michael Radford are planning to do King Lear.

Julie Taymor's Tempest, as one would expect from the director of Titus and Across the Universe, is visually intriguing. Also, Helen Mirren plays Prospera (no, that's not a typo: the female Prospero will go by Prospera in this film). And that's bound to be exciting!

Pacino's Lear, which I learned about from Shakespeare Geek, is also interesting. It will be directed by Michael Radford, who directed Pacino in his recent Merchant of Venice. According to the article in Variety, " "Radford, who wrote the script, is making his second Shakespearean foray with Pacino." Wrote the script? Really? Not "adapted the play" or "composed the screenplay"?

In any case, my view is that the more Shakespeare films we have, the more we can think and talk about Shakespeare. I imagine Taymor's will be brilliant and Radford / Pacino's will muddle through. But I'm prepared to be surprised on both counts.

Pacino seems too energetic and youthful for Lear, even though he's technically the right age. But he brought Lear-ish-ness to Michael Corleone in "Godfather III," so like you I'm willing to be surprised.