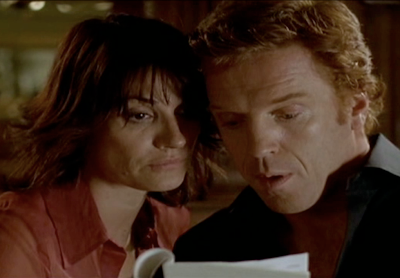 Much Ado About Nothing. Shakespeare Retold. Dir. Brian Percival. Perf. Sarah Parish, Damian Lewis, and Billie Piper. 2005. DVD. BBC, 2007.
The BBC, in their remarkable derivative version of Much Ado About Nothing, cleverly work Shakespeare's Sonnet 116 into a scene between the Beatrice analogue and the Benedick analogue. At first, I thought it was just a way to create some romantic tension between the two. Each of them has been told that the other is madly in love with them; each of them has started to fall madly in love with the other; but no one says anything about that. Instead, they read a sonnet together.

But the more I think about it, the more clever it gets. First, it stands in for the exchange of sonnets that the characters in Shakespeare's play make later in the play. Second, it gives the characters the chance to talk seriously on a serious (but non-threatening) topic, and that enables them to appear far more mature than they have to that point in the film. Even during the course of the scene itself (see below), the characters both seem to mature.

Third (and possibly the most interesting), the sonnet ("Let me not to the marriage of true minds / Admit impediments") picks up on a word used several times in the play itself—Don John says, "Any bar, any cross, any impediment will be medicinable to me" as he plots his evil course," and the Ceremony of Matrimony (see the 1552 version below) is echoed in the Friar's "If either of you know any inward impediment why you should not be conjoined, charge you, on your souls, to utter it." And the word "impediment" is merely a verbalization of the issue of impediment on which the play (and the film) constantly ring changes. For marriages to take place at the end of the play or the film, impediments need to be removed. And, as the wording suggests, that includes "inward" impediments in addition to the usual outward impediments (unsupportive fathers, friends, monetary situations, et cetera) that are the stock-in-trade of this kind of comedy.

But it's Valentine's Day! Let's just take a look at the lovely and romantic scene itself:


And, as a bonus, here's the full text of the sonnet and a bit of the marriage ceremony:

Let me not to the marriage of true minds
Admit impediments. Love is not love
Which alters when it alteration finds,
Or bends with the remover to remove:
O no! it is an ever-fixéd mark
That looks on tempests and is never shaken;
It is the star to every wandering bark,
Whose worth's unknown, although his height be taken.
Love's not Time's fool, though rosy lips and cheeks
Within his bending sickle's compass come:
Love alters not with his brief hours and weeks,
But bears it out even to the edge of doom.
If this be error and upon me proved,
I never writ, nor no man ever loved.

The Ceremony of Matrimony from the 1552 Prayer Book:


I require and charge you (as you wil aunswere at the dreadful day of judgment, when the secretes of al hearts shalbe disclosed) that if either of you doe knowe any impediment, why ye may not be lawfully joyned together in Matrimonie, that ye confesse it. For be ye wel assured, that so many as be coupled together otherwyse then god's word doth allowe, are not joyned together by god, neither is there Matrimonye lawfull.

Sonnet 116 is probably Shakespeare's most famous love poem. I would agreed to this statement "it gives the characters the chance to talk seriously on a serious (but non-threatening) topic". Great sharing of topics!

Sonnet 116 is the only time Shakespeare's language is in the play. Thanks for sharing this wonderful post. It helps me a lot.