Meryl Streep Comments on her Role as Kate 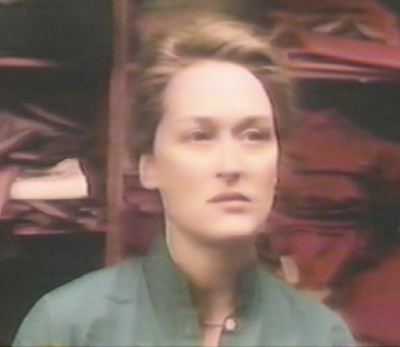 However, I'm not entirely sure I agree with all that they say. In the first clip I wrote about, Meryl Streep makes an analogy between a parent's love for a child and Katherine's eventual love for Petruchio. If people aren't bothered by the total selflessness of the former, why is there so much turmoil over the later?

All right, so that last one might apply. But the point holds in the other incidents. Petruchio is no baby.

Still, Meryl Streep says the word "baby" with such passion and fervor that she almost carries the point. Actually, she does carry the point in part—such love can and does exist between parents and children and between wives and husbands—and between husbands and wives. It may exist between Katherine and Petruchio. In the production the documentary presents, it does, in fact, exist. The second clip I wrote about demonstrates something of the initial magnetism between the two.

With that in mind, take a look at this clip of Meryl Streep and Raúl Juliá discussing their roles. Raúl seems to be talking about both Katherine and Meryl; Meryl responds to Raúl and Petruchio. At points, it actually seems something like professional wrestlers trash talking before a match.


Note: A total of four clips of this production are available on this blog: The First Clip, The Second Clip, The Third Clip, and The Fourth Clip.
Links: The Film at IMDB.
Copyright 2008-2039 by kj at 3:43 PM