Forbidden Planet. Dir. Fred M. Wilcox. Perf. Walter Pidgeon, Anne Francis, and Leslie Nielsen. 1956. Warner Home Video, 2000.
The Plots of The Tempest and Forbidden Planet are said to be amazingly similar in quite a large number of publications.

I suppose the similarities are mainly in characters.  The plot of this science fiction classic (and it really is a classic, influencing many films that followed it and entering pop culture in the same way that things like "Soylent Green" or "Resistance is futile" have)

contains a lot more death and destruction and general mayhem than Shakespeare's play.

And it also contains Robby, the Robot!  Hurrah!  I'm sure you've seen this Caliban analogue.  He became the quintessential icon of sci. fi. robots, even making it into The Simpsons on at least two occasions. 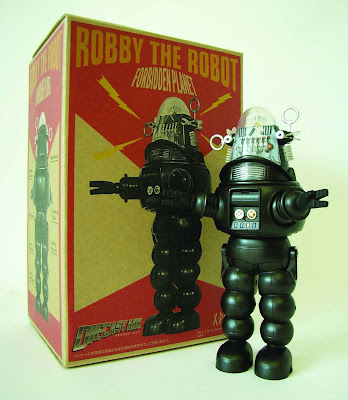 I also suspect that Marvin (of The Hitchhiker's Guide to the Galaxy fame) owes a great deal to Robby.

Robby is interesting because he's something of the opposite—or, I suppose, the enlightened or Rousseau-inspired version—of Caliban.

Anyway, without giving any spoilers, you also have analogues for Prospero and Miranda (they landed on this planet when the Miranda figure was an infant, and everyone died off but them) and a basic analogue for Frederick.  The Miranda figure, having met no human beings other than her father, is much taken with the flock of space travelers who arrive on their island planet.

But the plot . . . well, you should watch this fairly-good, fairly-not-t00-cheesy sci. fi. classic to see how much the writers owe to "The Swan of Altair."