A few final showers before the clouds of Tempest week scatter 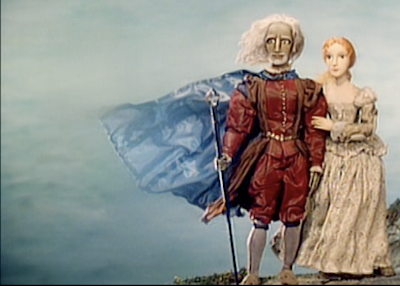 The Tempest. Shakespeare:  The Animated Tales. Dir. Stanislav Sokolov. Perf. Martin Jarvis, Timothy West, and Alun Armstrong. 1992. DVD. Ambrose Video, 2004.
I just wanted to mention (this is a MicroBlog, after all) three additional productions of The Tempest—and they couldn’t be more different from each other.

First, a 1908 silent version. I don’t have it with me at this moment, but I was surprised at just how advanced the techniques were for that year. It had a more convincing shipwreck than the BBC versions, some nice sudden disappearances of Ariel, and a much longer runtime than I expected. It’s available in a really remarkable DVD with a number of other silent version of Shakespeare plays.

Second, the Jarman Tempest. Whenever I read about Jarman, he seems to be described as the darling of the critics. I’m glad he’s somebody’s darling. I haven’t re-watched his version, but I did glance at it again. It’s a dark, often foul version with a fair amount of nudity (and nudity that is somehow different in quality than Greenaway’s film’s . . . it’s possibly still artistic, but for decidedly different purposes). All in all, it’s too avant-garde for my tastes. Watch this one at your own aesthetic and moral risk.

Finally, there’s a delightful animated version intended for a younger audience. Part of the twelve-play Animated Shakespeare series, this Tempest is bright and airy, with a genuinely funny (albeit quite strange) Caliban.