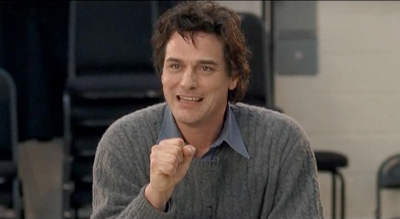 “Vex Not His Ghost.” By Susan Coyne. Dir. Peter Wellington. Perf. Martha Burns, Paul Gross, Don McKellar, Mark McKinney, Oliver Dennis, Susan Coyne, Stephen Ouimette, Catherine Fitch, and William Hutt. Slings and Arrows. Season 3, episode 2. Movie Central: Canada. 31 July 2006. DVD. Acorn Media, 2006-2007.
I know you've been looking forward to Lear Week at Bardfilm. We all have. Well, I have. And one reason is that I get to return to talking about Slings and Arrows.

Slings and Arrows is one of the three most brilliant television programs of the past ten years. And I think I would say that even if it weren't Shakespeare-related. (But it is, and that give it additional interest). The three seasons of the show take us through the lives of the actors, directors, administrators, and audiences of a Shakespeare festival in Canada. It's a dark comedy, and it's almost unbearably funny, witty, cheeky, touching, and true.

Each season gives us a different Shakespeare play to contemplate: Season One involves Hamlet, Season Two deals with Macbeth, and Season Three concentrates on Lear.

And on East Hastings: The Musical.

As it deals with King Lear, it shows us how the frustrations of Lear spill over into the lives of the actors. William Hutt plays the actor who plays Lear, and his character (characters?) desperately tries to be in control of every aspect of the play, his life, the other actors' lives, and the world. Like Lear, however, he finds he is unable to do so.

Here's a clip that gives us an overview of Lear's plot—as well as the plot of the big new musical also being staged at the festival that season. The director, Geoffrey Tennant, whom you'll see first, has been bursting into unexplained tears throughout the season. He does so at the beginning of the clip, leaving the William Hutt character in charge of giving a synopsis of the play.