Back to the Silent Tempest 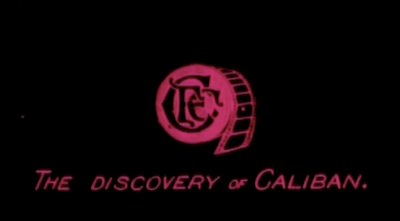 I managed to take another look at the silent version of The Tempest that I had mentioned earlier.  Spinster Aunt's list of silent movies for people who [think that they] don't like silent movies contained no Shakespeare films—scandalous!—and I wanted to recommend one.

I actually recommended a 1920 silent German version of Hamlet (more on that later), but I've been thinking that I should have mentioned this again.  Thinking back on it, I thought it was about thirty minutes long.  It's actually only twelve or thirteen.  They managed to put so much in in such a short amount of time!

Naturally, as Spinster Aunt remarks, the language of Shakespeare is, for the most part, lost in a silent film . . . but that's part of what makes these films so remarkable as films.

Anyway, more on all that later.  I keep having to remind myself that this is a MicroBlog and that my posts should be shorter.

p.s.  And it also has fabulous title cards.  Look at that color in "The dicsovery of Caliban" above!  Wow!


Click below to purchase the fabulous collection of silent films from amazon.com
(and to support Bardfilm as you do so).