The Granddaddy of Modern Tempests 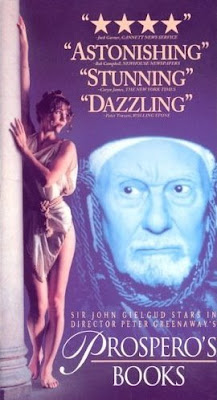 Prospero's Books is another film I'm glad to have seen in the theatre—even more so because it (amazingly) hasn't been released on DVD yet.  Sir John Gielgud speaks / reads / recites nearly every line in the play in the film in the audio track in the screenplay in the director's vision.  And if all that layering is confusing, wait until you see the film.

The film is layered, the screen often split into two or four or more two-dimensional segments and just as many (or more) three-dimensional ones.

Does anyone remember Myst, the computer game set on an island where mysteries abound?  Watching Prospero's Books is very much like playing that game.  (Note:  The game was released in 1993, so a Greenawayian influence is entirely possible.)

But I don't recall any nudity in the computer game; however, it's very hard to find a scene in the film that doesn't have nudity.

For that reason alone, the film is not for all viewers.  The nudity is, I suppose, part of an artistic vision rather than an intention to titillate, but it's pervasive.

Below is the (nudity-free) epilogue to the film.  The splash of water toward the end is part of the rich and strange visual layering.


Until it comes out on DVD, the film will be something of a rarity.  If your library has a copy, give it a try!
Links: The film at IMDB.