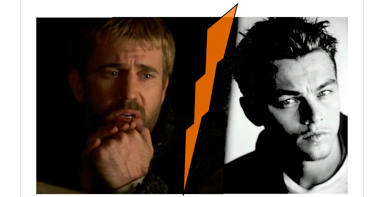 Mel Gibson
v.
Leonardo DiCaprio.
Yesterday, I made a qualified claim about Hamlet: There have been more film versions of Hamlet than of [almost] any other Shakespeare play. The qualification was in there because I hadn’t yet done the math.

Well, it turns out that the qualification may be correct. I did a quick count of the movie version made of the two frontrunners in the most-film-versions competition in Eddie Sammons’ Shakespeare: A Hundred Years on Film (London: Shepherd Walwyn, 2000). Sammons’ work is a bit uneven, leaving out some versions I would expect to be there and counting others I wouldn’t really consider countable (for example, the book lists The Lion King—which is legitimate—but it also lists two brief Lion King promo videos—which I wouldn’t really count as separate items), but, with his numbers, we are, at least, comparing apples and apples.

It’s close, folks . . . it’s awfully close. And developments since 2000 may have changed this neck-and-neck race to the finish.