Rothwell’s list is an extremely useful one—and it really becomes interesting when we consider the ways in which these seven overlap and combine. For example, Kiss me, Kate fits and does not fit into category iii—it’s a musical. But it’s also a mirror movie—a movie in which the characters are putting on a Shakespeare play. It might even count as a recontextualization, too!

“What,” I wonder aloud, “will the students make of today’s mysteries?”

One of them will be a cartoon short (I’m always fond of cartoon shorts before feature presentations, though I don’t always have time to provide one in class). It’s thanks to a student in the class that I’m aware of it at all. I’m very grateful, but I’m surprised that I didn’t know about it: I’ve been a Pinky and the Brain fanatic since before they were spun off from The Animaniacs . . . but that’s another issue.

I can’t say any more now, but I’m intrigued by just how many Shakespearean Derivative categories the episode fits! It fits vi, clearly. But it may also fit iii (there’s a musical), ii (there’s a play within the play within the plot to take over the world), vii (oh, of course there’s educational value here!), i, v, and iv!

Whatever other derivatives we may watch today (and however successful they may prove), I’m pleased to present “Melancholy Brain.” Great thanks to you, student, for bringing it to my attention! I feel duty bound to bring it to the attention of as many other as I can. Spread the Hamlet-related love! 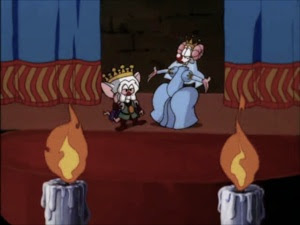