Homage or Plagiarism in Branagh's Much Ado About Nothing 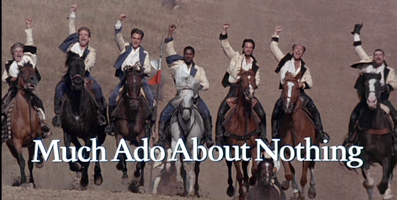 Much Ado about Nothing. Dir. Kenneth Branagh. Perf. Kenneth Branagh, Emma Thompson, Denzel Washington, Michael Keaton and Keanu Reeves. 1993. DVD. MGM, 2003. [To see what I’m about to talk about, view this sideshow of selected stills.]

After only a few minutes, Branagh’s Much Ado about Nothing presents a visual reference to the 1960 Western The Magnificent Seven (with Yul Brynner). When I first watched the film (in 1993—egad!), I didn’t get that specific allusion (“Ah,” I thought, “he’s playing with a Western cliché. Neat.”), but I did notice a later allusion.

When Dogberry enters, he gallops along (with his trusty sidekick) après la mode de (as the French may or may not say) the knights in Monty Python’s Holy Grail.

The only thing keeping it from being pure plagiarism (if such a terrible crime can ever be called “pure”) is that the scene is played sans noix de coco (as the French probably never say)—without coconuts.

I’m only half-joking about the possibility of plagiarism. When I first saw the movie, I thought, “Aw! [Yes, my thoughts tend to start with interjections. What, do you have a problem with that? Man! Forget about it!] That’s not fair to Monty Python. I hope they’re at least getting some royalties out of that.”

But Branagh may have had other purposes in putting Dogberry (who is often on his high horse) on such a low horse. It marks him as comic relief de la façon de (there we go again!) Monty Python, of course. But it also sets his position in relation to the other gallopers (whether sans cheval ou non).

That doesn’t redeem the other things Branagh does with Dogberry, but it explains the Monty Python reference.

That sort of . . . in-joke? homage? allusion? what do you want to call it? . . . is all over the place in film—particularly, it seems to me, in Shakespeare-related films. Even The Magnificent Seven is itself a retelling of Akira Kurosawa’s Shichinin no Samurai.