Much Ado About Ending (Caution: Spoilers!)

Note: Before reading this post, go watch the Shakespeare Retold version of Much Ado About Nothing. That adaptation changes Shakespeare’s plot substantially, and you really should see it to believe it . . . not read about it here. Thanks!
Our class had a lively discussion about the way the Shakespeare Retold series ended its Much Ado About Nothing. Part of the debate was over whether the play offers some hope—or, at least, some ambiguity—for Claude and Hero to get back together. Here’s a transcript (as best I could reproduce it) of the last conversation between the two of them that the film allows us to overhear: 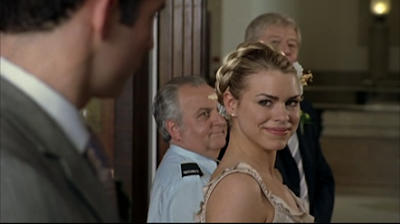