The rubber duck factory aspect (R.D.F.A.) is often seen as humorous—and it is. But it’s also darkly Nihilistic. In Almereyda, the business is top-notch, and the stakes (if you like that sort of thing) are high. Stressing the RDFA in Kaurismäki makes the narrative more meaningless.

The Almereyda has its own RDA (rubber duck aspect), but I think it tends to make that part of the narrative more significant and touching.

Among the “remembrances of [his] / That [Ophelia has] longed long to redeliver” (III.i.93-94) is a rubber duck (smaller than those in Hamlet Goes Business). 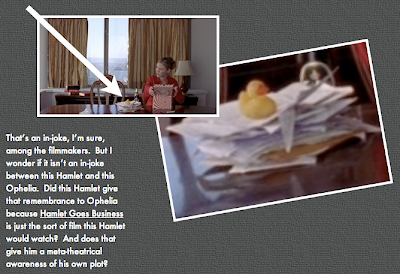 That’s an in-joke, I’m sure, among the filmmakers. But I wonder if it isn’t an in-joke between this Hamlet and this Ophelia. Did this Hamlet give that remembrance to Ophelia because Hamlet Goes Business is just the sort of film this Hamlet would watch? And does that give him a meta-theatrical awareness of his own plot?