“The Shakespeare Code.” By Gareth Roberts. Perf. David Tennant, Freema Agyeman, and Dean Lennox Kelly. Dir. Charles Palmer. Doctor Who. Season 3, episode 2 (New Series). BBC Wales. 7 April 2007. DVD. BBC Warner, 2007.
I was thinking of the Doctor Who episode as a recontextualization of Shakespeare’s age, but that’s not quite right. A récontextualization propre would be more like the Shakespeare Retold Much Ado About Nothing. Shakespeare’s play is put in a different context. In Doctor Who, the Doctor and his companion—probably especially his companion—are the ones who are constantly recontextualized, whether they’re adjusting to being on the moon or in the year 900,000 or south of the Thames in 1599.

Defamiliarization is a more apt term for what happens in this episode, particularly toward the beginning. The show tries to take Shakespeare’s unfamiliar age and convey to us what is familiar about it.

Near the beginning, the Doctor says to Martha Jones (and the camera shows to us), “You’d be surprised . . . Elizabethan England . . . not so different from your own time. Look over there. They’ve got recycling . . . 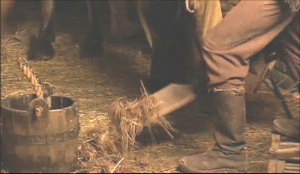 [As we approach a street corner preacher, we hear him saying, “the earth will be consumed by flame!”]

The message is that Shakespeare’s time shouldn’t be threatening. They have the same things we have . . . including Doctor Who (and, in his travels, The Doctor himself)!

It’s a neat trick, that guilt (or auspiciousness) by association! With a few brief lines, the producers of Doctor Who have made themselves the modern equivalent of a Shakespeare play.

Ah, well. Better them than Men in Trees, I suppose.