“A Star is Bored.” By Garry Marshall et al. Perf. Ron Howard, Henry Winkler, and Tom Bosley. Dir. Jerry Paris. Happy Days. Season 2, episode 10. ABC. 5 December 1974. DVD. Paramount, 2007.The expression “to jump the shark” comes, of course, from the famous—actually, infamous would be the more appropriate term—episode of Happy Days when The Fonz . . . um . . . jumped a shark. The phrase is used to describe the moment at which a previously-good show flops. It’s all downhill when a show jumps the shark.

For the academicians, here are the details of that episode: It’s titled “Hollywood: Part 3,” and it was originally aired on 20 September 1977. It was Season 5, Episode 3.

As Grandmother Jones was so fond of saying, I told you that to tell you this.

After showing the episode above (an episode brought to my attention by a colleague about two years ago), I thought of a new expression for the same idea.

In “A Star is Bored,” Fonzie plays Hamlet in the church production of the play (opposite the Ophelia pictured below). Even though the episode is Shakespeare-related, it’s not a good one.

In fact, I think Happy Days “played the Dane” in that episode. Once a show plays the Dane, it’s all downhill.

All the same, I had reasons and a rationale for showing it to the class. But the class will have to wait until after Spring Break to find out what they are—

—But I’ll need the break to come up with them! 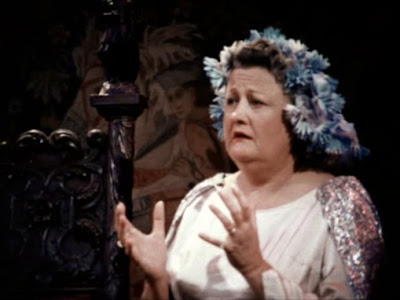