Shakespeare in The Royals? 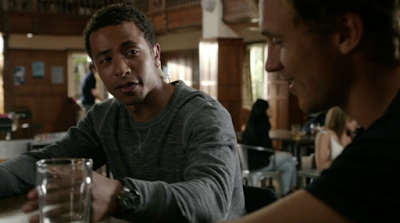 “Stand and Unfold Yourself.” By Mark Schwahn. Perf. William Moseley, Alexandra Park, and Merritt Patterson. Dir. Mark Schwahn. The Royals. Season 1, episode 1. E! 15 March 2015. DVD. Lionsgate, 2016.
How can I explain this one?

Once there was a book called Falling for Hamlet (for which, q.v.). It was not critically acclaimed.

And now there's an E! series called The Royals that is loosely based on that novel, which was loosely based on Hamlet. It, too, lacks critical acclaim. But it's made it into its fourth season. It's a pretty trashy soap opera with each episode given the title of a Hamlet quote.

We're in an imagined modern England among a set of younger, hipper royals than those they have now (with apologies to their gracious but less-hip current majesties). We have a character named Ophelia who becomes involved with Prince Liam, whose brother has just died. Prince Liam has a twin sister and a couple of cousins (who are there for comic relief and have a tiny Rosencrantz and Guildenstern vibe). The King and the Queen are both alive when the series starts, but, after only one episode, we can tell that the King's evil brother Cyrus will be causing trouble. The King is requesting Parliament to consider the dissolution of the monarchy, apparently because they're already so dissolute (see what I did there)? Ophelia's mother is dead, and her father (the palace's head of security) reads Ophelia the riot act about getting involved with the Prince.

Other than that, there's a lot more attention paid to the soap opera elements than to any Shakespearean elements.

Oh, but there is one Shakespeare quote—although it's from 2 Henry IV rather than from Hamlet.

Here's a quick sample that includes two scenes. The Queen is rude to Ophelia, who is able to return the rudeness with a bit of spin—a little bit of English on it. In the second scene, the character I take to be a rough Horatio analogue has a down-to-earth moment with the Prince:

For those of you keeping score, the Shakespeare quote is the same one Michael Jackson used in The Wiz (for which, q.v.).

Glancing through summaries of other episodes, I see only a little bit of Hamlet remaining—apart from the episodes' titles, each of which is a quote from Hamlet. So I don't think I'll be watching any further in the series. It's not my cup of English Breakfast.
Links: The Episode at IMDB.

Click below to purchase the first two seasons of the show from amazon.com
(and to support Bardfilm as you do so).