Oh'phelia: A Silent Burlesque Hamlet from 1919 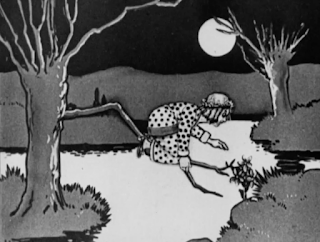 The entire film is just over ten minutes long, and it provides glimpses at Ophelia, Hamlet, Polonius, Gertrude, Claudius, Laertes, and the anthropomorphic willow that grows aslant the brook.

I'm most fond of the way the show plays with the title cards. At one point, the phrase "bloody business" (not from Hamlet, though it can be found in Macbeth and Othello) threatens to appear, but the censor shows up just in time, so it ends up being the "blooming business" instead. At another, a quote is cited as coming from a scouting manual, but it suddenly becomes attributed to Shakespeare.

Here's a quick streamlined version. I've reduced it in length to fit the Lumineers' song "Ophelia," which somehow seemed appropriate.

The whole film is available on YouTube, so I'm embedding it here as well. If it disappears, at least the shorter version above will remain.
Links: The Film at IMDB.
Copyright 2008-2039 by kj at 7:00 AM