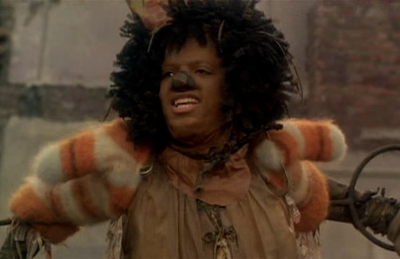 The Wiz. Dir. Sidney Lumet. Perf. Diana Ross, Michael Jackson, Nipsey Russell, Ted Ross, Mabel King, Lena Horne, and Richard Pryor. 1978. DVD. Universal Studios, 2008.
Posting to Bardfilm has become something of a treat reserved for the brief time between finishing one of the summer's projects and starting another. I've reached such a point, so I can pass along the connection between Michael Jackson and Shakespeare.

No, it doesn't have anything to do with the millions of fans who quoted Romeo, saying "O, that I were a glove upon that hand" (Romeo and Juliet, II.ii.24). Nor is it about Michael Jackson being the Shakespeare of his age (though both were gifted performers and both died in their early fifties).

Instead, it's Michael Jackson (as the Scarecrow in The Wiz) quoting from Henry IV, Part II:

There you have it! Now on to the next project!
Links: The Film at IMDB.

Is this a good and interesting film? I am sorry because I have not ever watched this film. So, what is the relationship between Shakespeare and Michael Jackson here?

The Wiz is a fantastic musical, and the music is tremendously thoughtful and through-provoking. This production is exceptional. The connection between Shakespeare and Michael Jackson is simply that Jackson quotes Shakespeare in this clip.

The Wiz is a fantastic musical, and the music is tremendously thoughtful and through-provoking. This production is exceptional. You should see it! Michael Jackson sings some magnificent numbers. Give it a try!

There is a strong link between M.Jackson & Shakespeare.Both are trying to warn us against the occult powers that dominate the world ...
But what 's remarkable that not only MJ has left clues related to Shakespeare , but also in the playwright's works we find allusions to the King of POP ( as well as those to the PRINCE ) ...
Besides, if Nostradamus knew about MICHAEL and his escape , because Shakespere not ' ? ( Let alone the authors of the majority of films , books etc , - Simpson , Back to the Future ... etc , )
Question: Who is behind it and why do it ?
Renato ZERO gave the answer in Sanremo in 2016 , after speaking of the need to STOP The Machine ( ..of mass destruction .. ? ) Concluded by saying to REPRESENT the ALIENS ...

Instead the infamous question:
" BE or NOT , This is a question .. ?

Michael seems that responds : " LOVE is in the ANSWER .. "