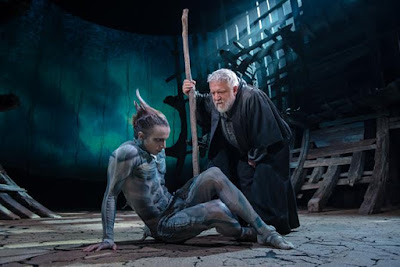 The Tempest. Dir. Gregory Doran. Perf. Alison Arnopp, Simon Russell Beale, and Jonathan Broadbent. 2017. DVD. Royal Shakespeare Company, 2017.
Gregory Doran has directed tons of interesting Shakespeare over decades. His 2017 Tempest pushes the limits of special effects on stage. Ariel was played by an actor, but the actor's moments were captured by video computer technology and projected onto curved screens that made Ariel appear to be floating above the stage. The technology also allowed the figure to be transformed in various ways. Here's a quick sample. Note how the actor is occasionally visible while the computerized simulacra floats above the sage.

The technology is impressive, but the acting and the overall vision of the play does not take a back seat to it. I'm particularly fond of the way they dealt with the meeting of Stephano, Trinculo, and Caliban (though the non-Shakespearean asides are likely to annoy some viewers):

I first saw the film at the 2017 Shakespeare Association of America Convention. This year's convention brought a fascinating presentation about the production and about the possible future directions of Shakespeare on stage.
Links: The Film at IMDB.