An Aery of Children, Little Eyases in The Children's Midsummer Night's Dream 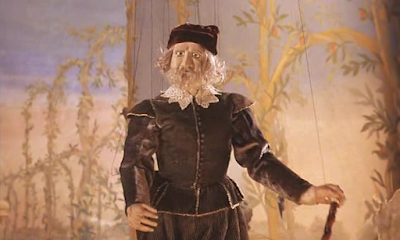 The Children's Midsummer Night's Dream. Dir. Christine Edzard. Perf. Jamie Peachey, John Heyfron, and Danny Bishop. 2001. DVD. Sands Films, 2001.
In a somewhat obscure passage in Hamlet, Rosencrantz, Guildenstern, and Hamlet launch into a tangential conversation about why the players—"the tragedians of the city"—are on tour instead of (it is assumed) in their usual playing space.

Rosencrantz has this to say by way of explaining how the actors have fallen on hard times:


There is, sir, an aery of children, little eyases, that cry out on the top of question, and are most tyrannically clapped for't: these are now the fashion, and so berattle the common stages—so they call them—that many wearing rapiers are afraid of goose-quills and dare scarce come thither.


What, are they children? who maintains 'em? how are they escoted? Will they pursue the quality no longer than they can sing? will they not say afterwards, if they should grow themselves to common players—as it is most like, if their means are no better—their writers do them wrong, to make them exclaim against their own succession?

This exchange about an aery (or nest) of children—a.k.a. little eyases (the OED tells us that an eyas is "A young hawk taken from the nest for the purpose of training, or one whose training is incomplete")—is usually taken as a comment on the children's acting companies of Shakespeare's day (rather than any that might have been around in Hamlet's day). There's some anxiety about job security for adult troupes of actors in the exchange, but we should remember that "now the fashion" isn't "always the fashion." Indeed, the children's companies proved to be something of a novelty act—interesting for the moment, but not long lasting.

I told you that to tell you this. Christine Edzard's Children's Midsummer Night's Dream is of much the same caliber. It's interesting, but it doesn't bear repeated viewings.

The interesting part about it is the frame. We seem to be watching a bunch of school children watching a marionette version of Midsummer Night's Dream, causing us to wonder if we're encountering another Strings (for which, q.v.). But then some of the children break into the world of the marionette play and, eventually, take over. Here's a flavor of that:


But beyond the interest of the frame, there's not much here. The acting is lackluster at best. I know that they're children (I've read the title), but I've directed children this age and younger and gotten much better, much more passionate performances than those we have here.

Even the Pyramus and Thisbe play—usually a show-stopper—is pretty lethargic. It shows that you need good actors to portray bad acting. With bad actors, you just get bad acting, not good bad acting (if you follow me). Here's part of the play-within-the-play to show that.

All in all, this is a one-hit wonder. Modern professional adult actors should feel no cause for concern. 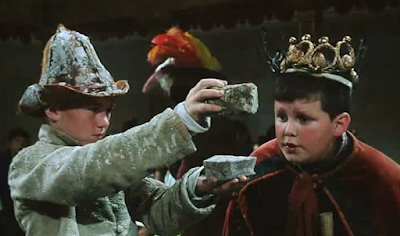