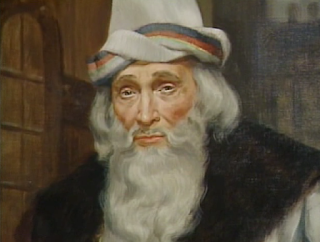 Shakespeare and Shylock: Fifty Years of Classical Acting (An Interview with Dr. Bob Jones). Perf. Bob Jones and Dale Savidge. 1988. DVD. BJU Press, 2003.
I knew that Bob Jones University produced quality Shakespeare plays and was known for doing so all over Greenville, South Carolina, and in the surrounding areas.

I did not know that Dr. Bob Jones, Jr., the second president of the university, acted extensively throughout his long career, even considering becoming a professional actor.

A few videos of Bob Jones University productions of Shakespeare plays are available, as is a film that is a mix of interviews and selections of Bob Jones, Jr. in The Merchant of Venice. The interview concentrates on Jones' thoughts on Merchant, but it also contains some general comments on Shakespeare.

In the following clip, the interviewer (Dale Savidge) throws Dr. Jones something of a slow pitch, right-across-the-plate question—but Jones' answer (and the accompanying clip of a performance) are worth watching:


Later in the film, we get to the central Christian reading of the play that Dr. Jones wants to explore (and the scene to back it up):

It's fascinating to see a Christian religious leader's views on Shakespeare and to see how Shakespeare can be integrated into religious beliefs.
Click here to purchase the film from BJU Press.
Copyright 2008-2039 by kj at 7:00 AM