A Musical Version of Midsummer Night's Dream for / 4 Kids / Kidz 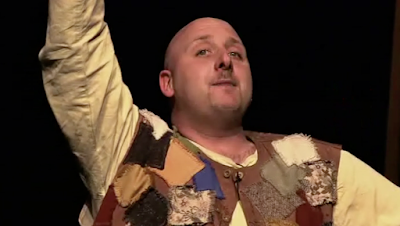 Essentially, it's a modernized-language version of Midsummer with a few songs sprinkled in. It has flavors of the British pantomime tradition. And, every now and then, a specific quote from the play makes its way in. Largely, though, it's a narrated plot summary.

I can't say it moved me very much. Even the Pyramus and Thisbe play at the end fell pretty flat—and you usually can count on that to rouse an audience.

That's not to say that there isn't some value to the production. There are some funny bits and some endearing bits, and the plot summary is certainly accurate. But Shakespeare's language is funnier and not actually that difficult for children to understand. And that's coming from someone who directed kindergarteners through fifth graders in a production of the play. It was edited for length, but the kids had no trouble understanding the play, memorizing their lines, and putting on a hysterical performance. If this had had Shakespeare's language and the musical numbers, it would be much, much better.

As a sample of what this film has to offer, here's part of the first meeting of the Rude Mechanicals—from Snug's being assigned the lion's part through the musical number (which is pretty funny and quite well done) that ends the scene: