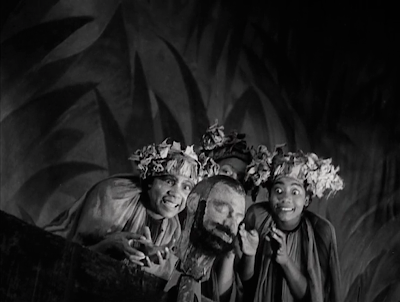 Macbeth [a.k.a. The “Voodoo” Macbeth]. Dir. Orson Welles. Perf. Jack Carter, Edna Thomas, Canada Lee, Maurice Ellis. Federal Theatre Project. 1936. We Work Again. Federal Works Agency, 1937. Web. Internet Archive. 24 September 2010.
Because I was running low on time, I had to streamline my presentation on global Shakespeaers. One intensely interesting and rare clip had to fall by the wayside.

In 1936, Orson Welles directed an all-African-American cast in a production of Macbeth funded by the Negro Theatre Unit of the Federal Theatre Project of the Works Progress Administration. In 1937, the Federal Works Agency put together a fifteen-minute documentary about providing work for black artists. That film contains a few brief minutes of Welles' production.

The production received its nickname from its setting. Welles transposed the play from Scotland to Haiti, incorporating voodoo priestesses and a witch doctor (Hecate, played by a male actor), together with African drums.

Allow me a quick tangent: The first performance of a Shakespeare play out of England for which a record is extant took place in 1607 off the coast of Sierra Leone, Africa. The drummers in Orson Welles' "Voodoo" Macbeth were from Sierra Leone (cf. Rippy 84).

The production is fascinating. The only known video clip of it comes from the end of the play:


Welles would use that closing line in his all-white 1948 Macbeth (for which, q.v.). But this production goes even further than that in giving the witches considerable power over the events of the play. They are right there at the end, after all, repugnantly glorying in Macbeth's downfall.

Marguerite Rippy has a magnificent article (in the tremendous volume Weyward Macbeth: Intersections of Race and Performance) on the production in which she examines the questions of race that it opens (for the full citation, see below). Was the production beneficial to and respectful of African-Americans, or was it actually a racist enterprise? Rippy provides a brilliant summary of the ambiguities in the production:

Welles' "Voodoo" Macbeth reflects modernist conceits of "black" primitivism, commingling African, Afro-Carribean, and African-American cultural referents to produce a fantasy of black culture. While his later projects became more self-conscious about deconstructing such fantasies, "Voodoo" Macbeth succeeded precisely because it re-articulated the primitivist aesthetic. Using Shakespeare to legitimize primitivism, Welles created a blend of high art and popular culture that drew in crowds and critics alike. His canny ability to channel racial associations from his surrounding culture bolstered his reputation as a genius, helping to catapult him from Federal Theatre Project director to co-creator and owner of Mercury Productions, which in turn would ultimately lead to his RKO film contract and his ensuing cinematic career. (89)

On the one hand, the production provided much-needed jobs for hundreds of African-American artists. On the other, the production has been criticized for being exploitive. I worry, for example, about the very term used to describe the production: the nickname "Voodoo" could be seen as dismissive rather than descriptive.

Whatever conclusions the production leads us to make, its combination of African, Caribbean, and African-American cultures is extraordinary fascinating. 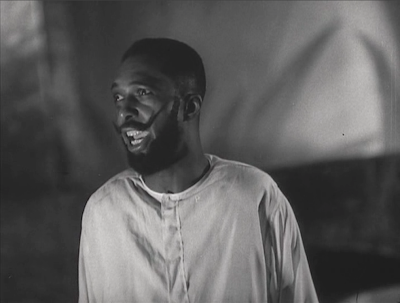 In the video clip above (and in the image here), Maurice Ellis plays Macbeth instead of Jack Carter. Page 237 of Weyward Macbeth confirms this. The Wikipedia article on the production is correct at this point in time about that point in casting; the IMDB site is incorrect on that point at this point.
Links: Information about the production at Wikipedia. The complete video of We Work Again at the Internet Archive.

The complete video of We Work Again embedded below: