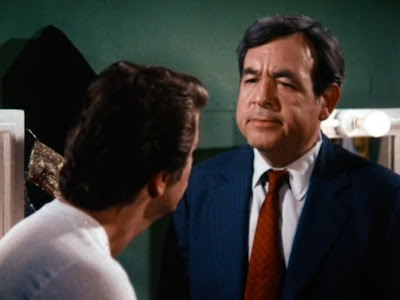 “A Star is Bored.” By Garry Marshall et al. Perf. Ron Howard, Henry Winkler, and Tom Bosley. Dir. Jerry Paris. Happy Days. Season 2, episode 10. ABC. 5 December 1974. DVD. Paramount, 2007.
Tom Bosley died yesterday. Like most of America, I remember him best as Mr. Cunningham on Happy Days. Unlike the majority in America (perhaps), I remember him for the effecting performance he gave as an audience member in a Happy Days version of Hamlet.

In an episode in its second season, the show provides Fonzie the opportunity of playing Hamlet in a church fundraiser. Near the end, the Fonz gets it, drawing on his personal experience to deliver Hamlet's most famous monologue. When he sees the audience (Mr. Cunningham included) dozing off, he interrupts the soliloquy to expand on its importance. Tom Bosley gives a magnificent performance of the thoughtful audience member recognizing unfathomed depths in the Fonz:

His congratulations to Fonzie after the show is subtle and restrained, but there's an indication of much below the surface. When he declares Fonzie's performance to be "Cool," we recognize the inability of vocabulary to communicate the profoundest thoughts of the heart; however, Bosley manages to convey the meaning behind the word admirably. Tom Bosley's Mr. Cunningham is often an iceberg, concealing hidden depths of his own.


Click below to purchase the season in question from amazon.com
(and to support Bardfilm as you do so).