"The Queen, My Lord, is Much, Much Better": The Sabotage of Minor Shakespearean Actors

Hale, Lionel. "The Queen, My Lord, is Much, Much Better." Punch 27 April 1955: 514-16. Kuhn, Bob, narr. and comp. "The Queen, My Lord, is Much, Much Better." By Lionel Hale. Punch 27 April 1955: 514-16. Web. 31 August 2010.I recently received an e-mail calling my attention simultaneously to two things I never knew existed: a fascinating fictional piece on those who play minor roles in Shakespeare plays and a narrated version of the piece that is accompanied by a video montage that serves to annotate it.
The plot of the piece is wonderful. Actors playing the minor roles begin a subtle form of protest at not being in the limelight. They start to sabotage the productions by ad libbing lines that bring chaos to the stage.

Bob Kuhn, a voiceover artist, narrates the piece beautifully. He's also responsible for the interesting visuals that accompany the narration. His website has some code to allow for embedding, but I've been unable to get it to work here. Instead, I can provide a brief selection of the whole:
Don't be satisfied with this brief extract. For the full video, head over to Bob Kuhn's Website. The entire piece is lengthy, but it's also masterfully done. I won't give away the conclusion here—you really will have to encounter the piece as a whole. 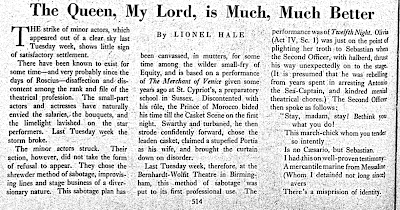