Last Season's Macbeth at the Guthrie 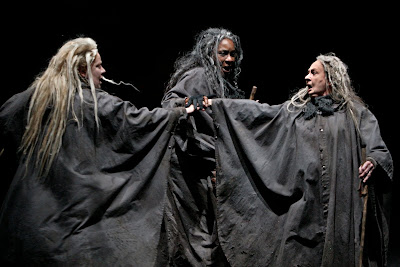 Macbeth. Dir. Joe Dowling. Perf. Barbara Bryne, Isabell Monk O’Connor, Suzanne Warmanen, Raye Birk, John Skelley, Benjamin Rosenbaum, J.C. Cutler, Bob Davis, James Noah, Peter Christian Hansen, Tyson Forbes, Erik Heger, Michelle O'Neill, Bill McCallum, Robert O. Berdahl, Sun Mee Chomet, Sam Bardwell, Kris L. Nelson, Nicholas Saxton, Graham Zima, Noah Coon, Charlie Lincoln , Elizabeth McCormick, and Nina Moschkau. Guthrie Theatre Company. Minneapolis. 30 January—3 April 2010.Photo Credits: Erik Heger (Macbeth) and Michelle O'Neill (Lady Macbeth) in Shakespeare's Macbeth, directed by Joe Dowling with set and costume design by Monica Frawley. In thinking about the multitude of ways Macbeth has been played throughout the centuries, I'm reminded of the Macbeth that the Guthrie Theatre produced last season. I saw the play twice, took copious notes, gave an address on the play at the Guthrie, and became swamped with grading. Regrettably, that means that I never wrote a post on what was quite a fine production. To start the process of rectification, let me point out some of the truly marvelous features of that staging.
I saw the show twice, and I'm glad I did. The first time I saw it, I thought it was a good, solid production, but it didn't seem to be much more than that. The second time, it was great. I'm not quite sure what accounts for the difference. Was the audience more attuned to the actors? Were the actors more attuned to the audience? Was the first time through—good though it was—an off-night for the Guthrie?
One difference particularly struck me. On the first night, Macduff delivered the line "He has no children" (IV.iii.216) almost with a scream. The second night, it was almost a whisper. The second was much more effective—the audience immediately recoiled in shock, realizing that nothing could quite answer Macbeth's horrific desecration of Macduff's family.
Other points, briefly considered:


The last point involves the final image that the production gave us. I had a number of discussions with students about it, and it was one of those extremely divisive issues. More students hated it than liked it, but those who liked it were vocal.
After Macbeth's downfall, he is raised up—a rope is attached to his ankles, and he's hauled upward, dripping blood the while.
My own reading of that decision was that it simultaneously critiqued and embodied one of Malcolm's closing lines: "this dead butcher and his fiend-like queen" (V.ix.35). If that's really all the play was about, why did we see it? Yet Malcolm does get to make this pronouncement—both visual and auditory—on Macbeth and Lady Macbeth. The production shows us a dead butcher while inviting us to consider that such a title is utterly inadequate to describe the soul in anguish, making the wrong decisions, that the play gives us.
The production was quite good; Joe Dowling made his audience think. I can't wait to see what they do with the three Shakespeare plays they're doing this season: A Winter's Tale, Comedy of Errors, and Romeo and Juliet.
Suspected origins of the "Witches in Ball Gowns" Device.
Links: The 2010-2011 Season at the Guthrie Theatre.
Copyright 2008-2039 by kj at 5:00 AM