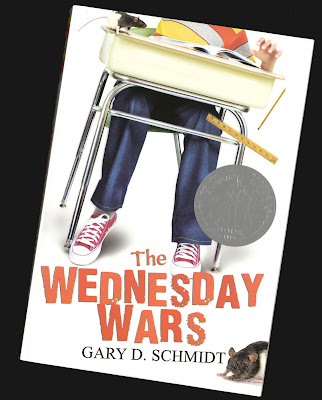 Schmidt, Gary D. The Wednesday Wars. Boston: Sandpiper, 2007.
During another brief lull between grading essays—and while we're on the subject of young adult novels that have a Shakespearean connection—I'd like to recommend The Wednesday Wars, Gary Schmidt's moving, humorous, deep, and award-winning novel.

Schmidt sets his novel in Long Island during the 1967-1968 school year, and the book doesn't pull any punches about the time period. The assassination of Dr. Martin Luther King and the assassination of Bobby Kennedy both find their tragic way into the novel. The war in Vietnam (and protests about the war in Vietnam) figure prominently, as does the Cold-War-era fear of nuclear annihilation. This historical accuracy provides tremendous depth to the plot and the characterization.

Yet the seriousness of the time period provides a tremendous counterpoint to the hilarity of our narrator's seventh-grade school year. Holling Hoodhood, our hero, is the only Presbyterian in his class. On Wednesday afternoons, all the Catholic students head to Catechism lessons at the Catholic church; at the same time, all the Jewish student head to Temple for Hebrew School. That leaves Holling and his teacher, Mrs. Baker. He's convinced that she hates him, though she probably just hates having what might otherwise have been a free afternoon filled with one student. At first, she has him clean chalkboards and clean the rats' cage. 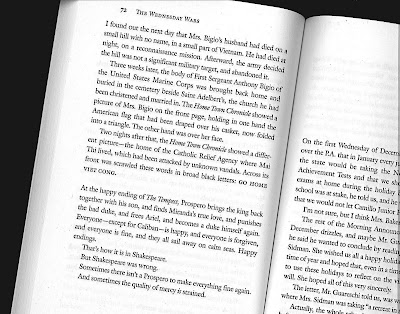 Then she considers that their time might be better employed studying Shakespeare. And that's where, for the Shakespeare buff, the novel really gets rolling. Mrs. Baker has Holling read several plays—in an attempt, he believes, to bore him to death and get her Wednesday afternoons back. If that's her intent, it backfires. He's intrigued by The Merchant of Venice, though he says that it's not as good as Treasure Island, and he admires The Tempest as a place to pick up Shakespearean curses. Later, he uses his knowledge of the play to earn cream puffs: the baker, it turns out, is a Shakespeare fan who needs someone to play the part of Ariel.

I don't want to give away too much of the plot, but I will say that comedy and tragedy are equally divided in the novel. Two of the main characters have family members fighting in Vietnam, and one of Holling's classmates is a recent émigré from Vietnam who has to face prejudice and hatred from some of the staff and students at the school. After the words "Go Home Viet Cong" are written on Mai Thi's dwelling, our narrator reflects on the event:


At the happy ending of The Tempest, Prospero brings the king back together with his son, and finds Miranda's true love, and punishes the bad duke, and frees Ariel, and becomes a duke himself again. Everyone—except for Caliban—is happy, and everyone is forgiven, and everyone is fine, and they all sail away on calm seas. Happy endings.

That's how it is in Shakespeare.

But Shakespeare was wrong.

Sometimes there isn't a Prospero to make everything fine again.

And sometimes the quality of mercy is strained. (72)

That passage is characteristic of the novel's complexity. There may be happy endings, but they certainly aren't simple.

This novel has everything: baseball, Shakespeare, a pair of rats named Sycorax and Caliban, cream puffs—"brown, light, perfect cream puffs" (30)—everything! In fact, the only criticism I have is that the novel seems to be too favorable of the New York Yankees. However, it's easier to accept the 1967 Yankees than, for example, the 1998-2000 Yankees.
Links: Gary Schmidt's Calvin College faculty page.