The Evidence for Shakespeare off the Coast of Africa 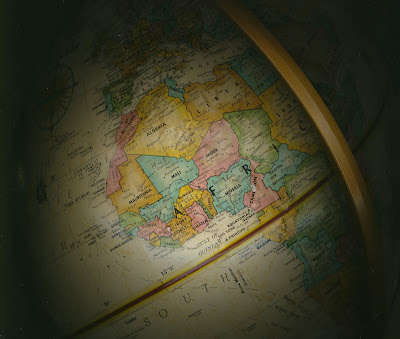 Chambers, E. K. William Shakespeare: A Study of Facts and Problems. 2 vols. Oxford: Oxford University Press, 1930.The debt we owe to E. K. Chambers cannot be calculated. His contribution to the field of Elizabethan Drama is limitless; his work on Shakespeare is matchless.

For my presentation on global Shakespeares, I've been investigating claims about the earliest productions of Shakespeare plays in Africa. A number of internet sites state that the first Shakespeare play performed in Africa occurred in 1607, but none that I saw cite the source material—and many of them are imprecise as to which plays and to the location of their performance (the plays—Hamlet and Richard II, for the record—were performed off the coast of Africa rather than in Africa: a distinction that will prove important).

Chambers gives us not only the fascinating text that reports the performance, he notes the issues surrounding its printing. Thomas Rundall, one of the council members for the Hakluyt Society, collated selections from a large number of naval manuscripts into one convenient volume, which was published in 1849. Rundall, Cambers thinks, may have taken the journal from which this extract comes home with him from one of the Indian offices of the East India Company and failed to return it. 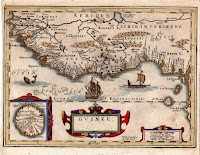 But I told you that to tell you this. On September 6, 1607, Captain William Keeling, in command of the Dragon, invited a Portuguese-speaking interpreter—Chambers tells us that he was an African Christian named Lucas Fernandez, "brother-in-law of the local king Borea" (334)—for dinner and a show. The dinner was aboard the accompanying ship, the Hector; the show was on the Dragon. They performed "the tragedie of Hamlett." The ship was anchored off the coast of Sierra Leone, West Africa.
At the end of the month, Keeling invited Captain Hawkins of the Hector aboard, and his "companions acted Kinge Richard the Second."
Hawkins may have felt left out when he heard what show Lucas Fernandez got to see; on March 31, 1608, he got to see Hamlet when the ship was off the coast of Socotra (Strachan and Penrose 26), which is near the Horn of Africa—on the other side of the African continent.

I cannot fathom the idea that Hamlet was being performed off the east coast and the west coast of Africa while Shakespeare was not only still alive but was probably busy composing Coriolanus, Timon of Athens, Pericles, Cymbeline, and The Winter's Tale.
I also can't quite get my mind around the reasons Keeling gives for the performance. Here's the relevant extract as presented in Chambers:

1607, Sept. 5. I sent the interpreter, according to his desire, abord the Hector whear he brooke faste, and after came abord mee, wher we gaue the tragedie of Hamlett.

30. Captain Hawkins dined with me, wher my companions acted Kinge Richard the Second.

[1608, Mar. 31]. I envited Captain Hawkins to a ffishe dinner, and had Hamlet acted abord me: which I permit to keepe my people from idleness and unlawful games, or sleepe. (334-35)

Shakespeare has probably been put to worse purposes. And it's reassuring to think that Hamlet can be used as a preventative for rather than an incentive to sleep. But shouldn't the reason for a production of a Shakespeare play—particularly under such circumstances—be more than that?

For my presentation, I'll be discussing one part of all this that intrigues me: the inward-looking nature of these performances. The plays were not performed in Africa—just off the coast of Africa. They (apparently) weren't performed—with the exception of the translator—for Africans. And they weren't performed to present or embody or offer "culture" to anybody. They were ostensibly performed to keep the mariners from gambling. And, we presume and hope, for the entertainment and intellectual value the play offer.
Whatever the reasons behind the performances, we have this magnificent record of them: Hamlet off both coasts of Africa by 1608 and Richard II off the east coast of Africa by 1607. Stunning.
[Note: The extract above is also available on page 231 of the Hakluyt Society's original publication (for the citation, see below).]

[Note: I'm skeptical of the Spiritual Last Will and Testament of John Shakespeare (William Shakespeare's father) because the original has vanished since its transcription; to be fair, I should be skeptical of this document for the same reason. But I must admit that I'm less skeptical of this document, perhaps because less is riding on the information it presents. But other extracts from the document were also transcribed by a second independent entity, and that serves to support its validity as well.] 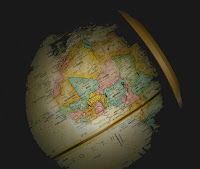 Rundall, Thomas. Narratives of Voyages toward the North-West, in search of a Passage to Cathay and India 1496-1631. New York: Burt Franklin, n.d. Originally published by the Hakluyt Society in 1849.