The End of Almereyda's Hamlet 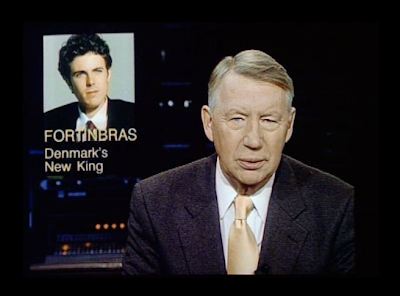 We're allowed to catch the last part of a story about the rise of Fortinbras to the position of CEO of the Denmark corporation:


The concluding words are the lines given to Fortinbras (and one line given to the English Ambassador) in the play:


This quarry cries on havoc. O proud Death,
What feast is toward in thine eternal cell
That thou so many princes at a shot
So bloodily hast struck?
The sight is dismal. (V.ii.364-68)

At that point, MacNeil pauses reflectively and offers these thoughts:


Our wills and fates do so contrary run
That our devices still are overthrown;
Our thoughts are ours, their ends none of our own. (III.ii.211-13)

The speech is the Player King's. The effect of placing them here is to invite us to ponder whether the film itself—or any of the characters in it—can achieve their purposes. It calls attention to the postmodern aspect of those lines: intentionality cannot be a consideration in interpretation. The film's opening title card: "The King and C.E.O. of Denmark Corporation is dead."
Links: The Film at IMDB.