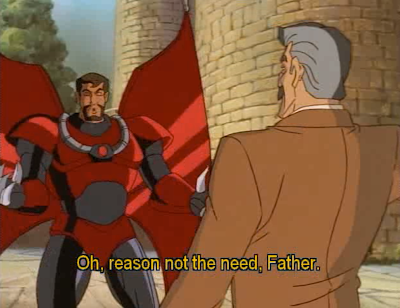 “The Mirror.” By Lydia Marano. Perf. Keith David, Jonathan Frakes, Edward Asner, and John Rhys-Davies. Dir. Frank Paur. Gargoyles. Season 2, episode 18. Syndicated television. 11 September 1995. DVD. Walt Disney Home Entertainment, 2004.
A very long time ago, I wrote about a student who had (a long time before that) recommended the animated television series Gargoyles as a source for much Shakespeare-in-Popular-Culture material (for that post, q.v.). At that time, I noted that the second season of the show was rumored to have much more Shakespeare in it than the first season.

It was an understatement.

There's too much to even begin to cover here. There's an episode (the one cited above) in which Puck is brought to Manhattan and hilarity ensues. There are quotes (as in the image above) from many of the plays. And Macbeth becomes a major figure in the Gargoyles mythology.

In fact, so much lies in that last sentence, that I have to point you toward an entry on Grimorum, the Gargoyle Wiki (did you know there was a Gargoyle Wiki?) that details the character of Macbeth. 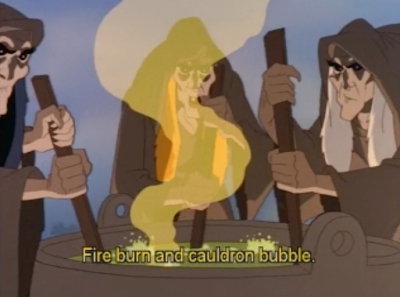 With all that, I can do little more than catalogue the series, pointing interested parties toward its use of Shakespeare. Oh, and I can give you a little taste of the way the show uses Shakespeare. Here's some of the backstory Gargoyles provides for Macbeth.

In the scene below, we have travelled back to Scotland in the 1000s—when Scots and gargoyles fought each other (or, occasionally, fought together against a common enemy) regularly. Macbeth and Duncan are out for a stroll in the fog with their respective children when something happens that will lead Macbeth to have a strange sense of déjà vu when he strolls in the fog with Banquo later in his life:

Click below to purchase DVDs of Gargoyles from amazon.com
(and to support Bardfilm as you do so).

I love that his alias is "Lennox Macduff."

Well, you wouldn't want to be too obscure—not if you really were Macbeth!