Shakespeare in the Old West 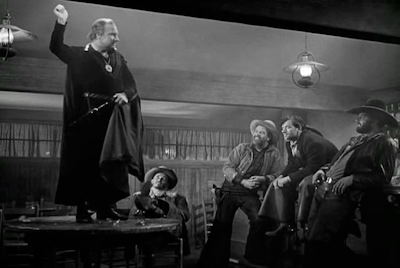 My Darling Clementine. Dir. John Ford. Perf. Henry Fonda, Victor Mature, Walter Brennan, and Alan Mowbray. 1946. DVD. Twentieth Century Fox, 2004.
John Ford's classic western about Wyatt Earp, "Doc" Holliday, the Clanton family, and the Shootout at the O.K. Corral contains a bit of Shakespeare, too. Even though "Doc" Holliday says "Shakespeare in Tombstone" in an incredulous tone, I suspect that the connections between Hamlet and the rest of the film are intentional.

Here is a conflation of two scenes: the grand entrance of Granville Thorndyke (played by Alan Mowbray), the actor who has come to town to play Shakespeare; and the Clanton's threatening demands for something other than "them poems." Claiming to have "a very large repertoire," Thorndyke audaciously presents his audience with Hamlet's soliloquy ("them poems" got nothin' on that there poem):


I'm intrigued by Old Man Clanton's concluding line: "When you pull a gun, kill a man." Could it be a paraphrase of Hamlet's Father's Ghost's advice to the Prince?
Links: The Film at IMDB.

In Stagecoach, Doc Boone utters some 'Shakespearean' lines, about 'the topless towers of Ilium'. These lines were by Marlowe, not the Bard of Avon. Other than in My Darling Clementine, did John Ford make use of Shakespeare's works in any other of his motion pictures?

I don't believe so, but I'm not an expert in this branch of the field.