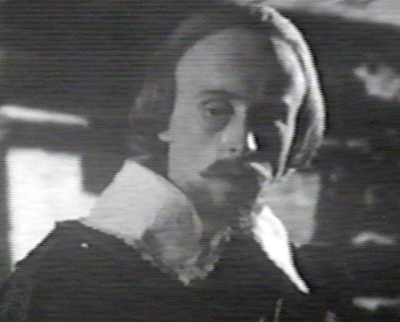 
Yes, Bardfilm realizes that, especially in the new series, Shakespearean references, allusions, quotations—nay, even the Bard himself—are not rare. But this is a brief but telling moment of Shakespeare in the second season of the original series! For fans, that means William Hartnell (the first doctor) traveling with the first companions.

Intriguingly, the episode doesn't involve a journey through time to the age of William Shakespeare. Instead, the Doctor has rigged up a kind of "Time Television" that enables him to see various events throughout time (for example, Abraham Lincoln delivering the Gettysburg Address or the Beatles playing a pre-1965 concert). Because of this new technology, the TARDIS Travelers (and we along with them) can pinpoint a conversation involving Queen Elizabeth I, William Shakespeare, and Francis Bacon:

That may seems quite flippant and forgettable, but quite a number of interesting inferences are present in this segment:


Overall, the clip takes a relatively conservative position toward Shakespeare, yet it plays with the anecdotal evidence and (possibly) with the authorship question by placing Bacon alongside Shakespeare. And, of course, his initial rejection of the idea of writing a play based on the history of Prince Hamlet—followed by a dawning recognition that he could write something not in his usual style—is intriguing. The move from a kind of posited Ur-Hamlet to Hamlet becomes a turning point in Shakespeare's career. In this imagined version, that turning point is not due to the death of Shakespeare's son Hamnet but to a casual remark from a self-flattering member of the court.
Works Cited