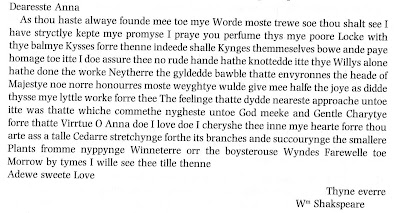 Schoenbaum, S. Shakespeare’s Lives. New Edition. Oxford: Oxford University Press, 1993.
Each one of us should dip into Shakespeare’s Lives from time to time. It's a massive—and a massively-delightful—book that tells the fascinating story of what people have done with Shakespeare's biography through the years. One intensely-interesting set of anecdotes revolves around William Henry Ireland. Starting in the late 1800s, Ireland purported to find tons of documents written by and to Shakespeare. He forged every one of them, often not terribly cleverly.

For this Valentine's Day, I thought it would be amusing to see what Shakespeare wrote to Anne Hathaway (as imagined by Ireland). The image above contains the entirety of a letter from Will to Anne; but the letter isn't all. There's a poem, too. Such romantic and affecting poetry has seldom been heard before:


Is there inne heavenne aught more rare
Thanne thou sweete Nymphe of Avon fayre
Is there onne Earthe a Manne more trewe
Thanne Willy Shakespeare is toe you.