Macbeth among the Gargoyles 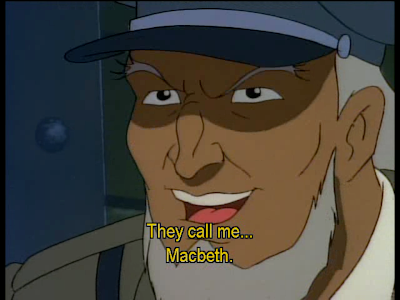 This post is another in the a-long-time-ago-a-student-mentioned-this-to-me-and-I'm-only-just-getting-to-tracking-it-down-and-writing-about-it category. Altaasmttmaiojgttidawai, as we call them here at Bardfilm, are not infrequent (I have three episodes of Wishbone, for example, that I'm attempting to find because of student comments), but they are sometimes puzzling. "What was Shakespearean about this again?" I often find myself asking myself.

About two years ago, a student recommended the mid-1990s animated series Gargoyles for its Shakespearean allusions.

I gather that the second season of Gargoyles alludes to Shakespeare more frequently than the first season does, but I've only managed to get through the first season (watching things at three times their normal speed with the subtitles on is a great way to zip through otherwise too extensively time-consuming material). What I found was a character (played by John Rhys-Davies, of all people) who says, "They call me . . . [insert skirl of Scottish pipes here] Macbeth" and a reference to Macbeth by two of the Gargoyles, who consider that "maybe we should" read the play (written by "some new writer called Shakespeare"—these Gargoyles are ancient creatures; that they consider Shakespeare "new" is an indication of this) now that they have an adversary by that name.

But that's it. The Macbeth in the first season of Gargoyles is power hungry and a bad guy, but he doesn't exactly serve as an analogue to the Macbeth of Shakespeare's play. Still, the intention is to endow the name with a chilling resonance—and the show manages to achieve that at the very least.

Note: John Rhys-Davies was in Jack Gold's 1980 Merchant of Venice. He played Salerio. They called him . . . [insert skirl of bagpipes here] Salerio.

Another Note: Bagpipes are mentioned more frequently in Merchant of Venice than in any other Shakespeare play—Macbeth included (there are no pipes of any sort whatever in the Scottish play).
Links: The Series at IMDB.