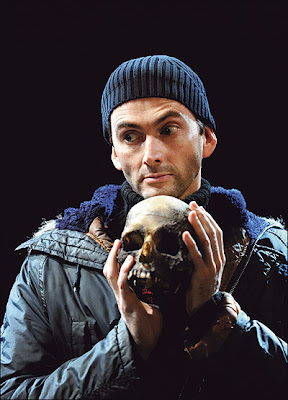 Many an article and various.An alert reader (thanks again, Dad!) has provided me with a number of links to Shakespeare news.

First, an article on the RSC's decision to stop using the real skull they have been using in the David Tennant / Patrick Stewart Hamlet.
Those familiar with Slings and Arrows will wonder whether life is imitating art or art life.  Or both.
Next, an article theorizing that the reason Shakespeare retired to Stratford and stopped writing plays was Miltonic in the extreme:  he was going blind from years of trying to read his own handwriting.
I have often thought that the reason his signatures (all from near the end of his life) were so cramped was because of some Jacobean strain of carpel tunnel syndrome—not because the man from Stratford was barely literate, as many anti-Stratfordians claim.  But I hadn't considered that his eyesight might have been failing as well.
Finally, an article on David Tennant, including information about his decision to give up playing the Doctor and his thoughts about the RSC production moving to London for the remainder of its run. 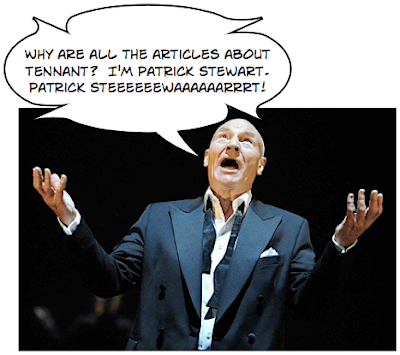 A Disgruntled Patrick Stewart Complains about
all the Attention that David Tennent is Getting.
Links: Previous entry about David Tennant as Hamlet.
Copyright 2008-2039 by kj at 8:57 AM