Countdown to the End of Shakespeare and Star Trek Week 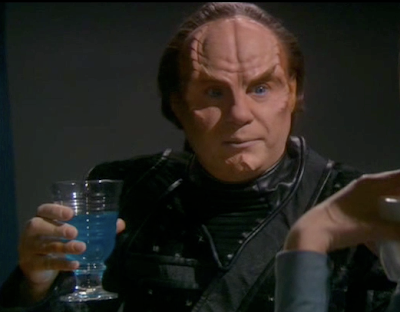 I've mentioned this episode before, but I did not provide, at that point, a video clip of the scene.

In this episode, we're placed in an alternate universe, and a ship from the regular Star Trek universe has found its way there as well.  The universe of the episode is harsh and unrelenting—and it doesn't care for Shakespeare!  I suppose that's one way to tell the difference between the good guys and the bad guys:  Tell me what you do with Shakespeare and I will tell you what you are (to paraphrase Brilliat-Savarin).

But the fact that this is the only reference to Shakespeare in the entire Star Trek:  Enterprise series (a prequel to The Original Series) isn't enough to redeem the series.  The only way I managed to choke my way through it was by watching it at three times the speed with the subtitles on.  At that speed, it's actually not a bad show!

This is the last known reference to Shakespeare in the Star Trek universe—but I couldn't bear to end with it.  I plan two posts to wrap up this subject—look for them soon at a blog near you! Actually, this blog.

I wanted to compare our major works with their counterparts in the other universe. . . . The stories were similar in some respects, but their characters were weak and compassionate. With the exception of Shakespeare, of course. From what I could tell, his plays were equally grim in both universes.