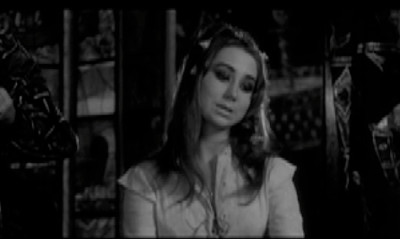 Shakespeare Wallah. Dir. James Ivory. Perf. Shashi Kapoor and Felicity Kendal. 1965. DVD. Merchant Ivory, 2004.
I apologize for this post, and I will back up my apology with a considerably-more-exciting post in just a few minutes.

Perhaps I'm bitter about it because it really has such promise!  The plot revolves around a troupe of actors who preform Shakespeare around post-colonial India.  That idea is exciting and intriguing and fraught with interest!  Wow!

But this film is dull, dull, dull.  This is especially true if you compare it to Branagh's A Midwinter's Tale (for which, q.v.), which is much more exciting and interesting in every way!
Links: The Film at IMDB.

I don't have 1% of the Shakespeare knowledge that you do, and I'm sure I approached this movie from a very different place, but I simply adored it! Of course, it's much more about the Shakespeare wallahs themselves (the doers, the sellers), as people and their relationships, than it is about their business of theater or the stories they tell and issues they address through theater.

You might find Felicity Kendal's autobiography, White Cargo, more to your liking - she does talk much more about the theater troupe's travels, the communities they performed in, etc. I believe her father wrote a book about the troupe too, didn't he?

I suppose I'll have to give it another try. Sigh.

I will say this for it: the screenplay is by Ruth Prawer Jhabvala. And she writes really well.

But for Shakespeare in an interesing Bollywood setting, I much prefer the 2002 film Bollywood / Hollywood, which features a grandmother who quotes Shakespeare at apropos moments throughout the film.

Perhaps Shakespeare Wallah was just too deep for me.

Thanks for the comment! I'll see if another viewing changes anything about it. I don't think the percentage of Shakespeare knowledge should really enter into it too much!